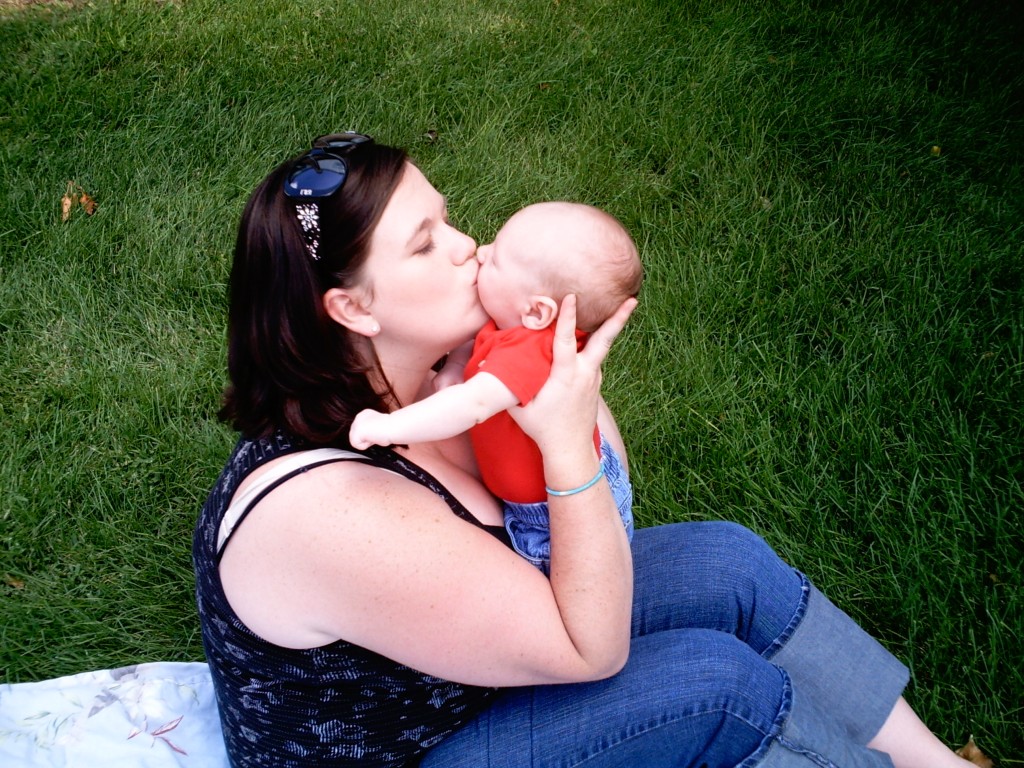 {Below you will read a heart warming story about a very dear friend of mine since High School, and her journey to becoming a mother.  Courtney does an amazing job giving you the facts that you need to know about PCOS, her story, and websites to find more information.  Enjoy!}

So how would you know if you were affected? The most common symptom of this disorder is infertility. Because women with PCOS do not ovulate correctly, they do not have regular menstrual cycles and as a result, they have difficulty becoming pregnant. All women with PCOS have many small cysts on their ovaries. However, women can have cysts on their ovaries and not be suffering from Polycystic Ovarian Syndrome. The syndrome is characterized by marked symptoms including; acne, obesity, excess body hair, insulin resistance or diabetes, thinning hair, high blood pressure, hormonal abnormalities, skin abnormalities, sleep apnea and depression.

Can it be cured or treated? Unfortunately, there is no cure at this point. However, PCOS can be managed effectively with a combination of medicines, diet and exercise. A diet low in carbohydrates can help manage insulin resistance. Many women are prescribed insulin sensitizers (Metformin or Glucophage). Insulin sensitizers seem to help regulate insulin levels as well as hormonal levels. Other medications are used to control embarrassing symptoms such as excess body hair, acne, thinning hair and obesity. Birth control pills are often prescribed to regulate menstrual cycles and hormone levels. Unfortunately, many doctors are not familiar with this condition and mistake symptoms as other issues. Doctors often treat the outward symptoms without treating the actual cause. Many women are told that they are obese and they need to lose weight. Weight loss can be an effective way to manage PCOS but women with uncontrolled PCOS often have extreme difficulty in losing weight.

What if I want to have a baby? There may be good news in your future. Current treatments have helped many women with PCOS achieve pregnancy. Diet and exercise can aid fertility by regulating hormones. Sometimes even a small weight loss can jumpstart ovulation. Glucophage can help regulate hormones which can lead to ovulation.
When these measures fail, fertility treatments like Clomid or IVF can be explored. Getting healthy should be the main focus and hopefully conception will follow.

A true story about PCOS

I was always a bit bigger than all of the other girls. Not huge, just 10 or 20 lbs more than the average. I hit puberty at the age of 12 and I was already sporting a C-cup. I remember feeling embarrassed that I was bigger but I just figured it was a genetic gift from my pudgy, food loving family. I started taking the pill at age 15 to manage painful period symptoms. My sophomore year in college I gained 40 lbs. I was tired and anxious all the time. I slept through class and struggled to keep up with my school work. Once again, I assumed that genetics and lifestyle were to blame. I finally went to my family doctor who ran a series of tests. After a thyroid scan, an incorrect diagnosis of diabetes and a series of doctors who told me I was doing too much school work and not moving enough, I gave up. I even saw an endocrinologist who noticed the stretch marks on my belly. But all he said was that I needed to “get some exercise”. I tried various antidepressants to relieve my anxiety but nothing worked. I decided that I would just have to deal with the misery that had become my life. Somehow I scraped by in college and even graduated a semester early. Even after I finished school, I couldn’t shake the constant feeling of fatigue and panic. It affected every part of my life. I was even having difficulty keeping a job. I finally quit working and stayed at home after I got married. A few months later my husband and I decided to try to start a family. I quit taking the birth control pills and hoped that nature would take over. It didn’t! Even worse, I was always late. I would often go months without a menstrual cycle. Each time my period didn’t come I was convinced I was pregnant. I took test after test, all negative. After a year I was frustrated, depressed and 30 lbs. heaver. I weighed 230 lbs and I was miserable. Just three years earlier I weighed in at a mere 150 lbs. At this point, I had taken a part-time job as a nanny for a doctor. At lunch with my boss I broke down. I told her that we were trying to get pregnant but it just wasn’t happening. She looked at me and said, “you have Polycystic Ovarian Syndrome”. I said, “No way”. It scared me. I didn’t know anything about PCOS but I knew it sounded serious. I let a few months pass before I was actually brave enough to do some research. I looked it up online and read the list of symptoms. I had almost all of them. I called my OB office and made an appointment with a nurse practitioner. Luckily for me, she happened to specialize in PCOS. She took one look at me and said, “we will run some tests but I am sure you have it (PCOS)”. She could tell by looking at me! I couldn’t believe it! Why didn’t any of those doctors notice it! I was relieved to finally have an answer, but scared that I would always be sick and never have a baby. Weeks later I learned that my testosterone levels were too high. My blood pressure was also elevated. We decided to try metformin and a calorie restricted diet. I also went back on birth control pills to help regulate my hormones. I wanted to lose weight and get healthy before we tried to have a child. I ate 1,000 to 1,200 calories a day. I tried to stay away from anything high in carbs. Six months later I had lost 50 lbs and my blood pressure returned to normal. In mid September my husband and I decided to try to get pregnant again. I quit taking the birth control pill half way through the pack (I continued to take the Metformin). On Halloween (a month and a half later) I took a pregnancy test and it was positive! I couldn’t believe it! It was the most amazing thing that has ever happened to me! Throughout my whole pregnancy I never really believed it was real. Finally when I saw my son’s face, I knew it had really happened. I took Metformin throughout my whole pregnancy and I continue to take it while breastfeeding. My son is two months old and I am only three pounds above my pre-pregnancy weight. In fact, I weighed less when I was nine months pregnant then I did at my wedding! I feel so much better. My anxiety has completely gone away and I am not so tired anymore! I know PCOS will always be a struggle for me. I will always have to count calories and watch what I eat but at least now I am healthy. Most importantly, I have the cutest kid ever and I finally feel like myself again!

{Many women live with PCOS, myself included, but it’s not the end to anything.  You can treat it and live a wonderful life!  – RobbieLee}

2 Responses to “Polycystic Ovarian Syndrome (PCOS) and Infertility | by Courtney”